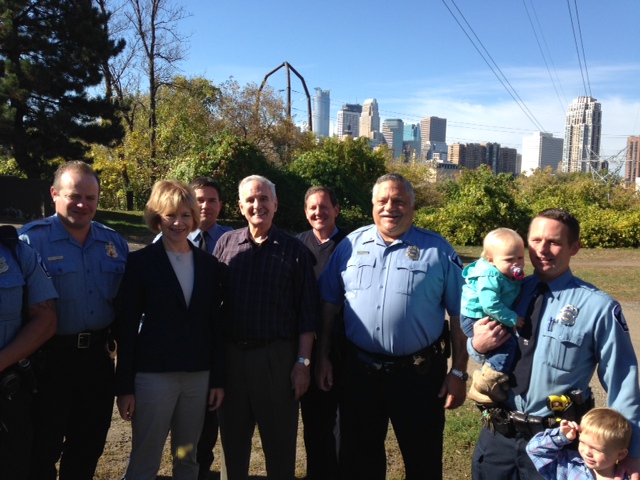 John Delmonico, President of the Police Federation, cited Governor Dayton’s advocacy on behalf of police officers and public safety in general. Delmonico cited the Governor’s support of Local Government Aid, which has helped cities across the whole state retain and hire police officers and provide needed equipment for police departments. Governor Dayton and the DFL legislature increased state aid to cities by $130 million after a decade of cuts.

“The Police Officers Federation of Minneapolis endorses people, not parties,” said Delmonico. “Mark Dayton has a long history of public service and most important to us, he understands the job of a police officer and the risks we face every day. One of the first bills Governor Dayton signed was to grant special protection to our police dogs who are really extensions of ourselves.”

“Mark Dayton gets what peace officers need to do our jobs. Governor Dayton is the person that police officers trust most to protect the public’s safety,” Delmonico said.

The Police Federation endorsed Tim Pawlenty for Governor in 2002 and 2006.

“I’m very honored to have the endorsement of the Police Officers Federation of Minneapolis.” Dayton said. “I have great respect for the work that our officers perform for the people of this state, putting their own lives in danger. Whatever I could do to be supportive over the last four years I’m proud to have done, including funding for Local Government Aid to provide more resources to improve police and fire protection, and I will continue to work with our law enforcement and look forward to doing so.”

The Police Federation is the single largest organization directly representing police in the state with over 800 officers.