This content is restricted to current sworn POFM members. If you are an existing user, please log in.
New users may register below. 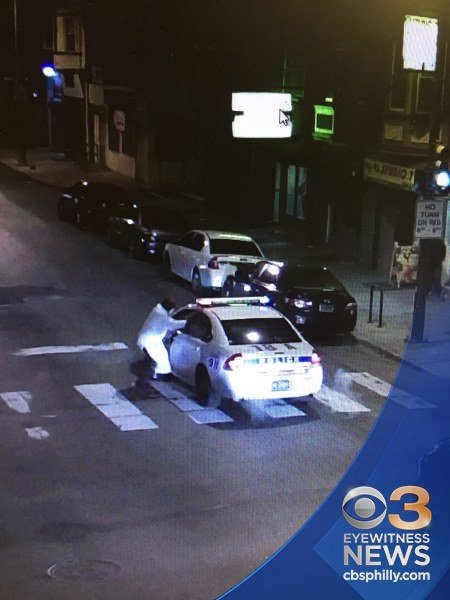 (CNN)—A Philadelphia police officer is recovering after being shot three times while he was in his patrol car in west Philadelphia on Thursday night, CNN affiliate KYW reported.

The officer was sitting in his car near an intersection when someone fired 13 shots into the driver’s side of the vehicle about 11:30 p.m., KYW reported, citing police.

“Shots fired! … I’m bleeding heavily!” the officer shouts in a recording of his radio call for backup. “I’m bleeding. Get us another unit out here!”

The officer returned fire, striking the alleged shooter, KYW reported. A suspect eventually was arrested and taken to a hospital, according to KYW.

The officer also was taken to a hospital, where he underwent surgery for a broken arm, KYW reported.

Philadelphia Police Commissioner Richard Ross told reporters that he saw video of the incident and that it was “absolutely one of the scariest things I’ve ever seen.”

Information on where the video came from wasn’t immediately available.

So you want to be a Minneapolis police officer, huh?

Before they officially go on duty, police recruits must go through a [difficult] process to prove they have what it takes to keep our city safe.

In most cases, one must be a licensed police officer before they can enter the recruit academy. They also may be eligible to be licensed. The police department will put out a posting for the position, and then candidates must take a variety of steps to enter the Academy.

Potential recruits must pass a PT test and go through an interview (they are ranked on both), and then the must pass a background check and a psychological and medical exam. If all are passed successfully, and depending on the needs of the department, the candidates will be brought into the academy.

According to Sgt. Steven Bantle, the Academy itself is a process 17 weeks long, with 40 hours of work each week. The format is a modified stress academy, which Sgt. Bantle says is similar to a military boot camp, and every day there is a physical ceremony, formations with inspections, as well as academics and instruction in a variety of topics.

Recruits are instructed on about 139 different topics, including everything from firearms training to cultural diversity. A lot of the training they participate in is city-based, rather than just in a classroom-like setting.

Sgt. Bantle believes that the Academy is “very demanding, both physically and academically”, in that recruits must meet fitness standards and pass a variety of academic tests in the process.

Once a recruit makes it through everything and graduates, they are assigned to field training for six months. During field training, recruit academy graduates work with three to five different officers and are evaluated on what they have learned. They must first pass field training before they receive their first assignment to one of five patrol areas, depending on the needs of the Department.

The last recruit academy class, which graduated on July 30th, 2013, included 24 recruits. Only 20, however, were recruits for the Minneapolis Police Department. Sgt. Bantle says that the academy also trains officers from other agencies, so the remaining four officers came from the Minneapolis Park & Recreation Board and the Veterans Affairs Association.

Sgt. Bantle believes witnessing the process and the progression of a recruit to a police officer can be very rewarding. He acknowledges that the recruits are very excited to become police officers, and it means a lot to him to actually see them achieve it.

“Some of these people come from unstructured backgrounds, and to put them in our academy which is very structured and disciplined, to go from nervous and scared to very confident is the best part,” he says.

For those who were unable to make it to the health care presentations, here is a copy of the slide show presentation. If you have any questions, please contact the Federation. [More]