It’s been said that the devil is in the details. That was certainly true for the September Jobs Report. Read on to learn why. 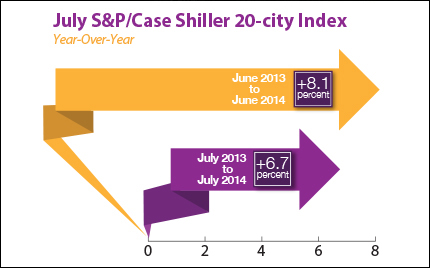 On the surface, the September Jobs Report was a positive sign for the labor sector, as 248,000 new jobs were created, more than the 210,000 expected. In addition, there were upward revisions to both July and August, adding 69,000 jobs to what had been previously reported. And the unemployment rate decreased to an astonishing 5.9 percent, handily beneath the 6.1 percent expected and the lowest level in six years.

However, digging further into the report, Hourly Earnings came in unchanged. This means that wages aren’t growing—and without meaningful wage growth, it will be hard for our economy to improve any faster. Plus, the Labor Force Participation Rate (LFPR) fell to 62.7 percent, reaching its lowest level since 1978. The LFPR measures the proportion of working-age Americans who have a job or are looking for one, and it should be moving higher in a recovery. Overall, while this was a positive report, there is still some notable slack in the labor markets.

In housing news, the S&P/Case Shiller Index of property values showed that home prices increased by 6.7 percent for the year ending in July. This was below expectations and the slowest pace since late 2012, as home price appreciation continues to come back down to more normal levels.

And there’s an important headline to watch as we head further into the fall. The Fed’s big Bond buying program, which has helped keep home loan rates low in recent years, will be coming to an end later this month. But the Fed has vowed to keep home loan rates at low levels for some time through another existing program. This will be a key story to monitor in the coming months.

The bottom line is that home loan rates remain near some of their best levels of the year, and now is a great time to consider a home purchase or refinance