Swing and a Miss!  Job Report Strikes Out

Friday’s key Employment report was disappointing nearly across the board. Against a consensus forecast of 205K, the economy added just 142K jobs in September. In addition, there were large downward revisions to the results from prior months. The economy has added an average of 167K jobs over the last three months. This level is consistent with an improving labor market, but it is well below the average monthly job gains of 260K seen in 2014. Wages also missed the mark with a slight decline from August. They were just 2.2% higher than a year ago. The Unemployment Rate was unchanged at 5.1%.  Mortgage rates had moved upward during the week in anticipation of a big job number, but reversed course after the report was released and ended the day slightly lower.

The Employment report and other recent economic data suggest that the U.S. is feeling the effect of a stronger dollar and economic troubles overseas. Exports are on track to post their first annual decline since the financial crisis. The ISM national manufacturing index released on Thursday dropped to the lowest level since May 2013. Weakness in the recent data has significantly decreased expectations for a Fed rate hike in 2015. 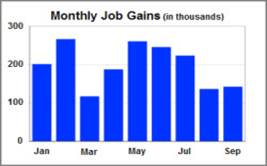 Week Ahead:
Factors: The ISM national services index will be released on Monday. The Fed Minutes from the September 17 meeting will come out on Thursday. These detailed Minutes provide additional insight into the debate between Fed officials and have the potential to significantly move markets. In addition, investors will be watching for any escalation of Russian involvement in the Middle East.

*Based on 70% LTV, primary residence, rate and term refinance and purchase, 175k minimum loan size, 30-day lock. Rates subject to change at any time based on bond market pricing fluctuations. **Minimum loan size for a jumbo loan is $418,000.  This information is intended for professional reference only, and not intended for consumer use. Additional qualifications and disclosures apply.

Have a great week!