“Home of the brave.” The Bond markets were closed on Tuesday in honor of Veterans Day, and the brave men and women who have served and sacrificed to protect and preserve our great nation. The economic calendar was quiet the rest of the week, but there are some key highlights to note. 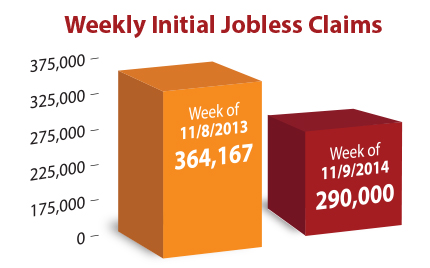 In the labor sector, Weekly Initial Jobless Claims came in at 290,000. Claims have remained below 300,000 for nine straight weeks—a feat that has not occurred since 2000. In addition, claims are 20 percent lower than they were this time one year ago. However, all is not golden as 18.2 million Americans still say they can’t find a full-time job. This is a big number, considering that we’re five years into an economic recovery. While the labor sector is improving, there is still more work needed ahead.

Oil prices continue to drift lower, reaching levels not seen since October 2011. This slide lower has put extra cash in consumers’ pockets just in time for the holiday shopping season, and it helped Retail Sales in October bounce back from the negative numbers seen in September. However, all-time price highs in meat, dairy and produce could tap into these savings at the pump.

Looking ahead, housing data is abundant in the coming week. And while the hot housing numbers from 2013 have cooled a bit this year, recent data suggest that the housing recovery is still intact. Existing Home Sales in September touched their highest level in a year, while New Home Sales hit a six-year high. These will be important numbers to watch as we look ahead to the housing sector, and whether its recovery continues, next year.