“The only people who never tumble are those who never mount the high wire.” Oprah Winfrey. After reaching higher levels at the end of 2014, Gross Domestic Product (GDP) tumbled in the first quarter of 2015. 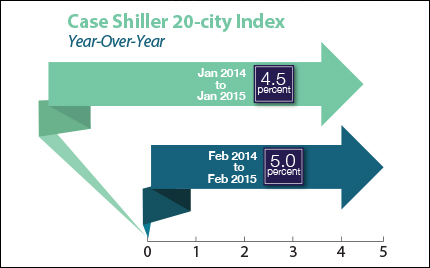 The first reading for first quarter 2015 GDP fell to an anemic 0.2 percent, well below expectations and down from the 2.2 percent recorded in the fourth quarter of last year. All of the components within the report were weak, including consumer spending. The weak growth could be due in part to the West Coast port strike and the severe weather across much of the country earlier in the year.

GDP measures the value of the production of goods and services in the U.S. and is considered the largest measure of economic activity. This is an important report to look out for, as it is a key barometer of our economic growth and recovery. It could also be a key factor in the Fed’s decision regarding when to raise the Fed Fuds Rate (the rate banks charge each other for lending money overnight)—which could have a big impact on the markets and home loan rates later this year.

In the housing sector, the February Case Shiller Home Price Index showed that home prices rose by 5.0 percent on an annual basis, up from the 4.5 percent annual increase recorded in January. This was the fastest rate of annual growth in six months. From January to February, prices rose 0.5 percent.