“You take the good, you take the bad.” The Facts of Life. That television series theme song also applies to recent economic news, as housing is a bright spot while economic growth overall remains sluggish. 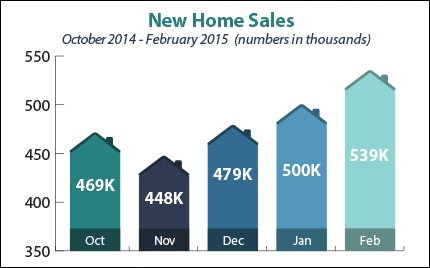 Existing Home Sales also rose by a modest 1.2 percent in February, to an annual rate of 4.88 million units, which was just below expectations. Low inventories were said to be a key factor in price growth, which rose at the fastest pace in a year.

However, growth for our economy overall is still sluggish. The final reading on fourth quarter 2014 Gross Domestic Product (GDP) was unchanged from the second reading, coming in at 2.2 percent. This was well below the 5 percent recorded in the third quarter of last year. For all of 2014, GDP was 2.42 percent, which is disappointing considering we are six years into our economic recovery. One positive item to note from the report: Consumer spending rose to 4.4 percent, which is the fastest rate since the first quarter of 2006.