They say that March comes in like a lion, but recent housing reports have sounded more like a whimper than a roar. 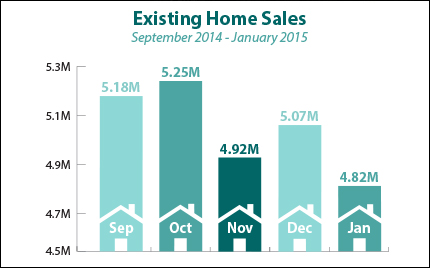 Existing Home Sales slipped in January, coming in below expectations. The annual rate of 4.82 million units was the lowest level since last April as tight inventories, seasonal weather and the ongoing rise in prices kept buyers out of the market. Despite the decline, sales are up by 3.2 percent from a year ago. And while New Home Sales in January were flat, the overall pace of sales hovers near a six-year high as the economy and job market continue to improve. Sales of new homes are up a solid 5.3 percent from a year ago.

Also of note, home prices around the nation rose by 4.5 percent from December 2013 to December 2014, as home price appreciation values are now near more normal sustainable levels. From November to December, prices rose by 0.9 percent, the largest advance since March.

The second reading of Gross Domestic Product for the fourth quarter of 2014 fell to 2.2 percent from the 2.6 percent recorded in the first reading. For all of 2014, GDP grew by just 2.4 percent, compared to 2.2 percent in 2013 and 2.3 percent in 2012. These numbers aren’t ones to write home about, as an annual rate of 3.5 percent is considered strong. GDP is the broadest measure of economic activity, and it will be important to see if 2015 can achieve higher growth.