Expect the unexpected. After a string of positive housing reports, sales of new homes reached their lowest levels of the year in June. 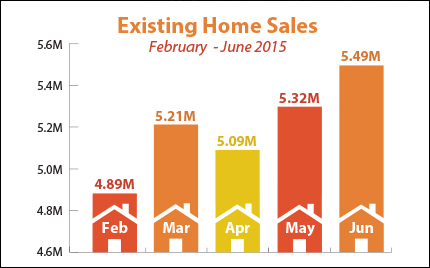 June New Home Sales unexpectedly declined by 6.8 percent to an annual rate of 482,000. May’s sales were also revised lower to 517,000 from the original estimate of 546,000. While sales of new homes make up a small portion of total home sales, the decline is reflective of limited supply and the reality that construction is expanding at a slower pace than demand can accommodate.

On the flip side, sales of existing homes soared in June, reaching their highest pace in eight years due to rising demand and limited supply. Sales rose to 5.49 million, above expectations and up 3.2 percent from May. Sales are up 9.6 percent when compared to June of last year and have increased on annual basis for nine consecutive months.

Also of note, weekly Initial Jobless Claims fell to a 42-year low of 255,000, and have been running below the 300,000 mark since late February, the longest such streak in 15 years. However, the strength of the labor market could be exaggerated a bit due to volatility during the summer months.

Regardless, one thing is clear: The Fed will be closely analyzing all the housing and labor sector reports at its upcoming meeting, as it continues to evaluate when to raise its benchmark Fed Funds Rate.