“There’s no place like home.” News from the housing sector was front and center, and with rates remaining near historic lows, great opportunities remain for those looking to purchase or refinance. 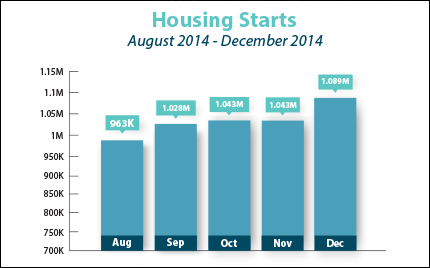 Housing Starts sizzled in December, rising 4.4 percent from November to 1.089 million annualized units, coming in above expectations. The rise in Housing Starts was the strongest annual pace in seven years and it was led by a jump in starts for single-family homes, which reached their highest level since early 2008.

Building Permits, a sign of future construction, did decrease by nearly 2 percent in December but still came in at a strong 1.03 million. Both Building Permits and Housing Starts figures were also revised higher in November.

Also of note, the January National Association of Home Builders Housing Market Index was 57. Readings above 50 are considered positive sentiments about market conditions. Meanwhile, December Existing Home Sales rose from November. However, sales in 2014 were lower compared to 2013 due to a sluggish start in the beginning of the year. Overall, the housing sector continues to improve.

In news overseas, the European Central Bank has announced that it will enact a massive Quantitative Easing, or QE, style of Bond purchases to fight off deflation and promote economic growth in the region. The news has caused extreme volatility in U.S. markets. However, Mortgage Bonds and home loan rates (which are tied to Mortgage Bonds) remain near historic best levels.

The bottom line is that now is a great time to consider a home purchase or refinance.