“I knew the record would stand until it was broken.” Yogi Berra. Record low temperatures have hit much of the nation, but that’s not the only chill in the air. 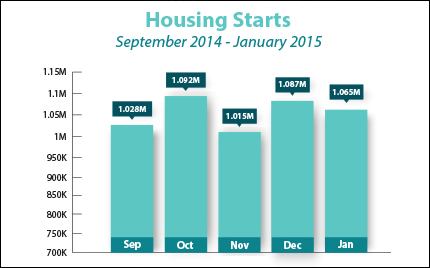 January Housing Starts fell by 2 percent from December to an annual rate of 1.065 million units. The weaker than expected numbers were due in part to a big decline in single-family homes, as student debt, tight credit conditions and rising prices have kept some first-time homebuyers from entering the market.

Housing Starts peaked in early 2006 at an annual rate of 2.27 million units. They subsequently fell to 500,000 units in 2009, during the height of the recession. On the positive side, in this latest report Housing Starts are up 19 percent from this time a year ago.

Building Permits, a sign of future construction, also came in below expectations at 1.053 million in January, while the February National Association of Home Builders Housing Market Index declined 2 points to 55. Readings above 50 mean that builders are positive about market conditions, so at least the decline didn’t cross that important threshold.

In other news to note, wholesale inflation remains tame, dropping the most in one month since November 2009 thanks to falling gas prices. Low inflation is Bond-friendly news, since inflation reduces the value of fixed investments like Bonds. And since home loan rates are tied to Mortgage Bonds, low inflation is typically beneficial for rates as well. Also helpful for Bonds and home loan rates: Greece’s debt woes and the continued fighting in Ukraine means investors see our Bond markets as a safe haven for their money.