“Keep lifting me higher.” Jackie Wilson may have been singing about love, but it’s weak economic data and mixed corporate earnings that have been pushing Mortgage Bonds higher, helping home loan rates remain near historic lows. 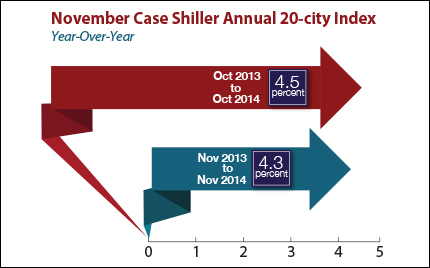 The first reading of Gross Domestic Product (GDP) for the fourth quarter of 2014 fell to 2.6 percent from the 5 percent recorded in the third quarter. For all of 2014, GDP grew by 2.4 percent, just slightly above the 2.2 percent in 2013. GDP is considered the broadest measure of U.S. economic activity, and strong GDP is an essential sign of our economic recovery. Also of note, Durable Goods Orders (i.e., orders for items that last for an extended period of time) fell by 3.4 percent in December, while November’s numbers were revised lower. These reports show that the U.S. economy continues to muddle along after a six year recovery.

In housing news, sales of new homes in December increased 11.6 percent from November, while the S&P/Case Shiller Home Price Index showed that home prices increased 4.3 percent annually in November. Home price gains have returned to more normal levels after the double digit gains seen at the end of 2013 and the beginning of 2014.

There was good news from the labor sector as Weekly Initial Jobless Claims fell to lows not seen in nearly 15 years. While a Labor Department spokesman noted that some of the decline could be attributed to the Martin Luther King Jr. holiday, the news correlated with the Fed’s sentiment in its recent Monetary Policy Statement that, “Labor market conditions have improved further, with strong job gains and a lower unemployment rate.” And indeed, consumer confidence has been growing as January’s reading surged to 102.9, the highest level in seven years.

The bottom line is that now is a great time to consider a home purchase or refinance.