“Up, up and away.” Consumer sentiment and retail sales may have soared higher, but both wholesale inflation and oil prices are on the decline. What does all of this mean for the markets and home loan rates? Read on for the breakdown. 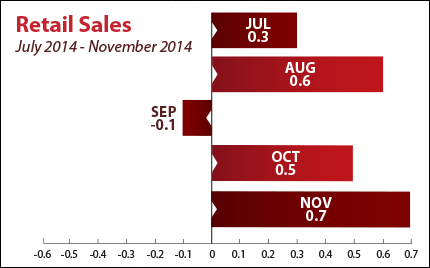 Consumer sentiment surged to 93.8 in December, reaching the highest level since January 2007 and the recent recession. In line with that sentiment, consumers also opened their wallets in November, spending money on goods ranging from cars to clothing as the holiday shopping season got underway. Retail Sales rose by 0.7 percent in November, which was the fastest rate in eight months.

One thing helping both consumer sentiment and retail sales of late is the continued decline in prices at the pump. In fact, the International Energy Agency recently cut its outlook for global oil demand growth in 2015. The markets have been especially volatile in recent weeks, and this news only added to the volatility. Despite the choppy trading in both Stocks and Bonds, home loan rates (which are tied to Mortgage Bonds) remain near historic lows.

Also of note, thanks to the decline in oil, the November Producer Price Index showed that inflation declined at the wholesale level. This is Bond-friendly news, since inflation reduces the value of fixed investments like Bonds, meaning this is also good news for home loan rates.