“I don’t know why I go to extremes.” Billy Joel. Temperatures may be warming across much of the country, but the extreme weather from this winter is still impacting some areas of the housing sector. 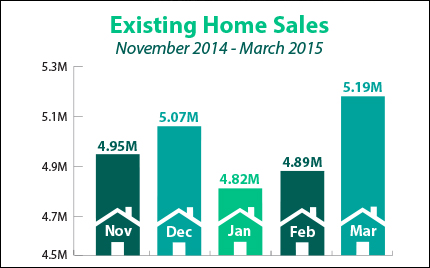 Existing Home Sales in March surged by 6.1 percent from February to an annual rate of 5.19 million units. This was the largest monthly increase since December 2010. Sales are also up 10.4 percent from a year ago. Lawrence Yun, the National Association of REALTORS® chief economist, noted, “After a quiet start to the year, sales activity picked up greatly throughout the country in March.”

On the flip side, New Home Sales in March unexpectedly declined as sales fell 11.4 percent from February to an annual rate of 481,000 units. This is a stark contrast to the 543,000 units recorded in February, which was the strongest performance for new home sales in seven years. The harsh winter weather in January and February shut down construction sites, and that had an impact on March’s figures. We will have to see if new home sales are further curtailed heading into the spring home buying season.

Also of note, Fannie Mae released its April 2015 Economic and Housing Outlook, revealing that economic activity was suppressed in the first quarter, largely due to the West Coast port disruptions and difficult weather patterns that gripped a large portion of the Northeast. Now that spring has arrived, it will be important to see if economic activity blooms along with the weather.