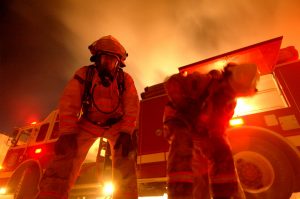 Running low on air, firefighters from contractor Wackenhut Fire and Emergency Service replace their oxygen tanks while fighting a fire at Forward Operating Base Marez in Mosul, Iraq, on Thursday, June 8. The fire was at a local restaurant and jewelry store. (U.S. Air Force photo/Tech. Sgt. Jeremy T. Lock)

As of January 1, 2019, a new law has gone into effect that may drastically change the way work-related PTSD claims are handled in Minnesota. For PTSD injuries that occur on or after January 1, 2019, there is now a presumption for first responders that their PTSD is work-related. A first responder’s PTSD still must meet the criteria set forth in the DSM-V and be diagnosed by a doctor of psychology or a medical doctor working in a related field. The covered “first responder” positions include:

If you fall under one of these covered positions, and you’ve been diagnosed with PTSD, this presumption will apply if: 1) you were on active duty, 2) you do not have a previous PTSD diagnosis, and 3) your PTSD injury was claimed on or after January 1, 2019.

PTSD became a compensable work injury under the Minnesota Workers’ Compensation Act as of October 1, 2013. Since this time, employers have been denying PTSD claims at a rate that is much higher than physical injury claims. Based on a review of our past cases involving police officers and firefighters from 2013 to the present, PTSD claims were denied by employers and insurers about 80% of the time. This means that only 20% (or fewer) claims have been accepted and paid by employers and insurers and everyone else has been denied access to ongoing workers’ compensation benefits. A claim denial in workers’ compensation means that the employee has to go without medical, wage loss and rehabilitation benefits until the claim is litigated or settled. This can be an extreme financial hardship for first responders who are unable to work because of their mental health condition. This also creates barriers to first responders’ access to effective mental health care treatment.

Denied claims also take a significant psychological toll on first responders. These are people who are suffering from significant mental health issues and being told by their employers and coworkers—either explicitly or implicitly—that they should “suck it up,” get back to work, and that these PTSD symptoms are “just part of the job.” It is difficult for many first responders to seek medical treatment anyway because of this “rub some dirt on it” culture and because they know a PTSD diagnosis could end their career.

When a first responder does finally seek treatment or advice with regard to their deteriorating mental health, it usually happens after some type of “rock bottom” event—such as a DWI, a divorce, a work performance plan, an excessive use of force complaint, or a suicide attempt. Following events like these, first responders feel like they are left with no choice but to seek legal or professional help; however, in the majority of cases, the first responder needed medical care and treatment for PTSD symptoms far earlier. Unfortunately, even when first responders do report their PTSD injuries and try to get medical assistance, the workers’ compensation system has not been there to provide the help that first responders need. Employers and insurers deny PTSD claims regularly and force first responders into litigation to establish their entitlement to wage and medical benefits. This process can be grueling, especially without a legal advocate on your side. The litigation process forces first responders to constantly recall their traumas and it can feel like they are being attacked or not believed when they are reliving these vulnerable moments.

We are hopeful that this new law, which creates a presumption that a first responder’s PTSD is work-related, will force employers and insurers to accept and pay more of these claims “voluntarily.” This means that first responders will be eligible to receive ongoing workers’ compensation benefits—such as medical treatment and wage loss benefits—and will be able to get effective medical care and treatment much earlier. In turn, we hope that this will allow many more first responders to return to work in their chosen fields.

If you are a Minnesota police officer, firefighter, corrections officer or first responder experiencing work-related mental health issues and have questions about your rights under the law, contact Meuser Law Office, P.A. for a free, confidential, no-obligation consultation. Call us today at 1-877-746-5680.