The Federation has endorsed Bev Benson for Judge. Bev has an excellent track record as being a strong prosecutor. Please assist with her campaign. 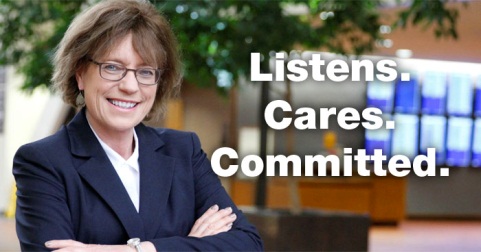 BEV BENSON FOR HENNEPIN COUNTY JUDGE, SEAT 53
Bev Benson is running for Hennepin County Judge (Seat 53) in the November 4th election. Ms. Benson has been a prosecutor for 28 years, 25 years in Hennepin County, and 3 years in Stearns County. She has specialized in the prosecution of domestic abuse, child abuse, sexual assault and homicides. Bev Benson graduated from William Mitchell College of Law (1985), completed Graduate Coursework at Luther Seminary (1982) and graduated from Augsburg College (B.A. Political Science 1981)

Bev has been an AFSCME member for 25 years. She is a member of Local 2938 and previously served on the Executive Board.

She has been a presenter and trainer at the National and State levels. She has also been a member of training teams funded by the US State Department who trained Judges, Prosecutors, Battered Women Advocates, Defense Attorneys and Police on best practices for investigating and prosecuting domestic violence cases in Russia. In 1999, Bev Benson received the “Exceptional Contribution to the Community” award from Hennepin County Commissioners recognizing her work on domestic violence in Russia and locally.

Bev has 15 years of experience moderating League of Women Voter Candidate Forums for Legislative, County, City and School Board Elections, and served as President of her local Wayzata/Plymouth League of Women Voters. Other personal volunteer service activities include: presenting trainings on domestic violence at the Minnesota Indian Women’s Center and the Rape and Sexual Assault Center. She has volunteered as a reader to second graders at the Nellie Stone Johnson Elementary School and volunteered at the Oak View Elementary School and Cedar Island Elementary School, the later two in the Osseo-Maple Grove School District. She is a Sunday School teacher and a Girl Scout Mom.

If your organization can let its membership know about Bev Benson for Judge by emailing your membership and/or providing information in your mailings and/or website, this would be greatly appreciated.