Eight minutes after Justine Damond reported a woman’s distressed call for help, she called 911 a second time to make sure police had the right address. Officers arrived in 9 minutes, 41 seconds, according to an incident detail report. The response time landed close to the citywide average for Priority 1 calls in the second quarter of 2017, which is 9 minutes 47 seconds. In Southwest Minneapolis’ 5th Precinct, the average Priority 1 response is 10 minutes 22 seconds.

“And sometimes when these numbers go up, it typically tells us something about what’s happening in the Police Department,” Yang added. 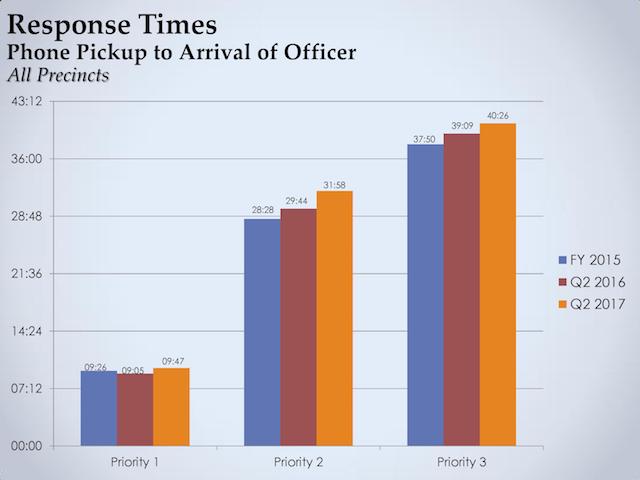 Source: Minneapolis Police Department
Source: Minneapolis Police Department
Officials said staffing levels play a role in response time. Yang said the number of officers fluctuates and currently stands at 852, and police administration expects that number to swell to about 900 toward year-end. Officers numbered 875 at this time last year, he said.

Lt. Bob Kroll, president of the Minneapolis Police Officers Federation, said one could argue the current force is far too small for the growing city. The Minneapolis police force stood at 940 in the late 90s, he said.

“The population has grown and the size of the force has gone down,” he said.

Kroll said attrition and retirements are keeping the force short of its authorized strength. And some officers are leaving early in their careers to work in other cities, or are leaving policing entirely, he said.

“This job is just not how it used to be. We are so heavily scrutinized for everything you do and don’t do,” he said.

Public Information Officer Sgt. Catherine Michal said a minimum number of officers is always working on a given night. If the number on a shift dips too low, she said, police can use overtime to fill positions.

“The Police Department had a hefty share of overtime last year,” Council President Barb Johnson said. “They use it when it makes sense, and we’re used to that.” 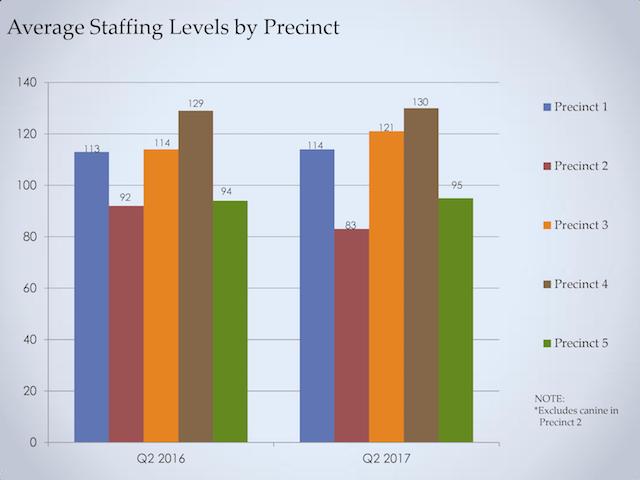 Mayor Betsy Hodges has asked the new Police Chief Medaria Arradondo to weigh in on the forthcoming Police Department budget.

Michal said a major incident like a shooting can tie up officers at a scene for hours. Other officers might shift into the area to help answer calls, leaving behind precincts that become shorter-staffed. Johnson said at an August 2016 Public Safety, Civil Rights and Emergency Management Committee meeting that a single shooting can engulf five-seven squad cars to handle the scene and talk to witnesses.

“More officers are on the beat, so they’re getting out of their cars,” Arneson told the Council committee last summer. “So on these Priority 2s and 3s, if they’re assigned a call, they have to get back to their car.”

Priority 1 calls involve an unstable scene with an imminent public safety threat or property loss or damage. Priority 2 calls have no immediate threat of harm, but a timely response is still desirable. Priority 3 calls involve situations that are stable.

Kroll said the extra foot beats come with a tradeoff, and this year’s focus on community policing comes at the expense of 911 call response.

Following Damond’s 911 calls in July, some community members have questioned the speed of the police response.

“The fact that she needed to call twice is a concern,” said Caroline Palmer, public and legal affairs manager for the Minnesota Coalition Against Sexual Assault.

She said the incident made her wonder how quickly police can respond to violent crime in all parts of the city.

“It raises a lot of questions,” she said. 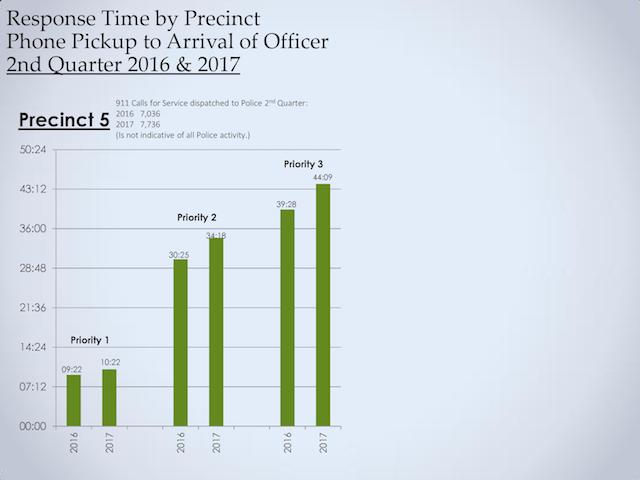 “I say that from having to work there many years ago. You spend the majority of your time up in the higher crime areas, you’re up near Franklin Avenue and Lake Street and … near 35W, you’re on Lyndale and Nicollet and Hennepin. When you get way out Southwest they just don’t have the numbers.”

Johnson said the 5th Precinct response is often a matter of geography, given the lakes and the concentration of calls farther north.

“The squad cars can be quite a distance away from the corners of the neighborhood,” she said.